You versus Wordbed Game play instructions

WordBed is a word search game where you try to find as many words as possible on the game board. Words are always left to right going horizontally, vertically or diagonally. For each valid word you get a score which is based in the Scrabble value of each letter plus an increasing bonus for 7 or more letters.

WordBed is the Test Bed for learning new words.

Note: The Android version of WordBed is a small variation of the PC version of the game. Read these instructions first then view the Android specific information via this link. 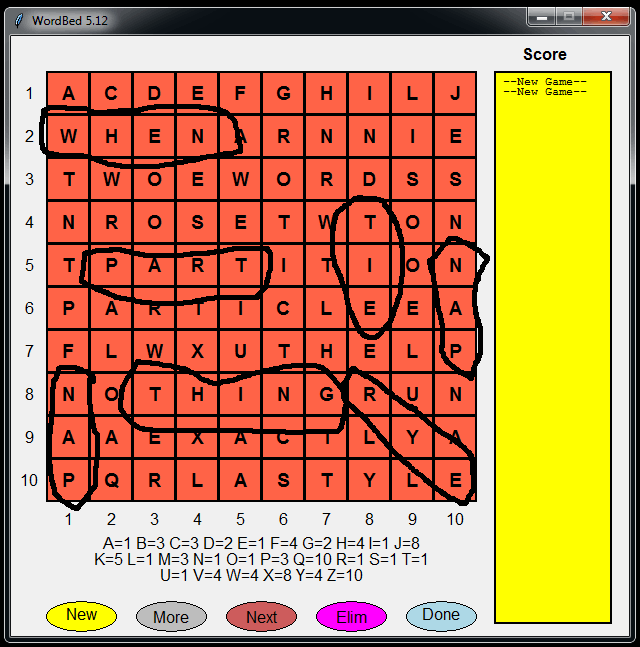 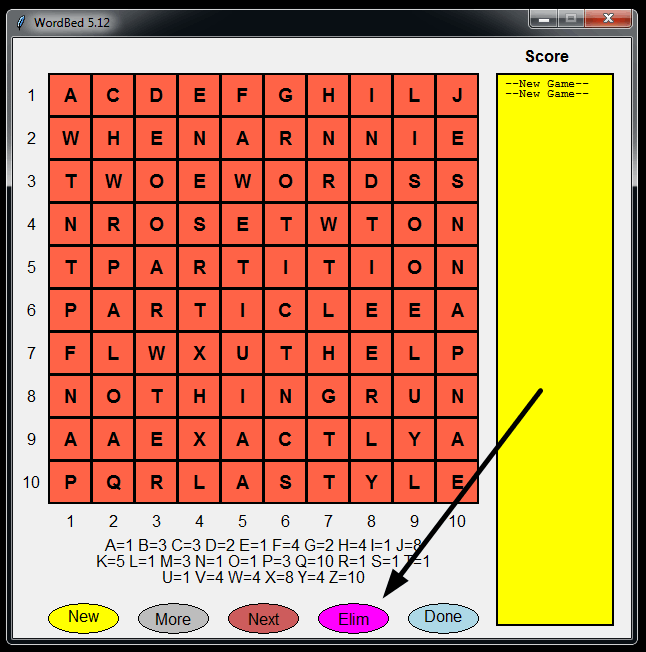 After you find as many words as you can, you hit the ELIMininate button. That will cause all the words found to be removed from the board. The letters that remain will fall to the bottom of the board to fill in any holes. Then letters will move to the right to fill any remaining holes. You then continue to look for words. 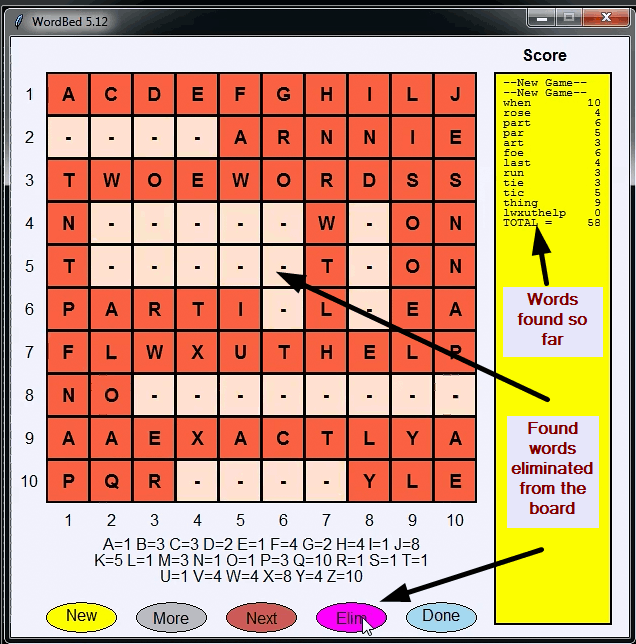 Eliminate will first show you where the words were located that is will remove  at this point of the game. 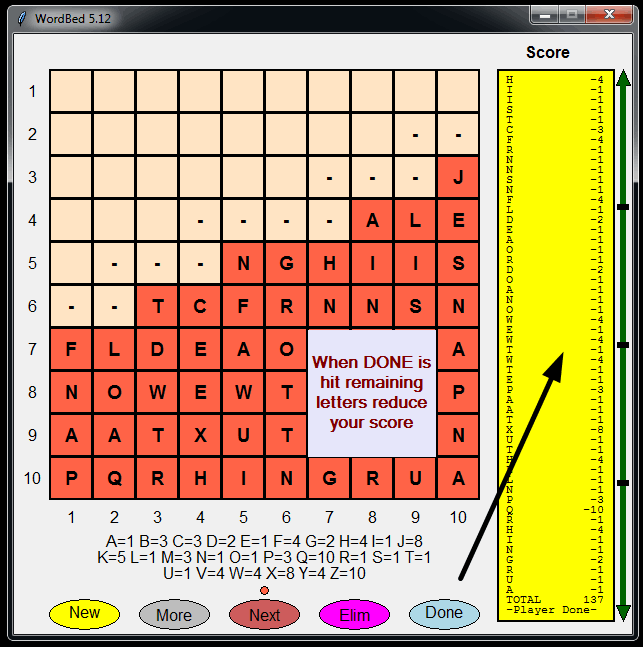 When you are completely finished, you hit the DONE button. The point value of any remaining letters reduces your score and the final total appears on the scoreboard.

Letters can be changed on the board if they are not blank. The hyphens indicate that these ARE empty boxes that may be changed to form more words horizontally, vertically, or diagonally to the right. 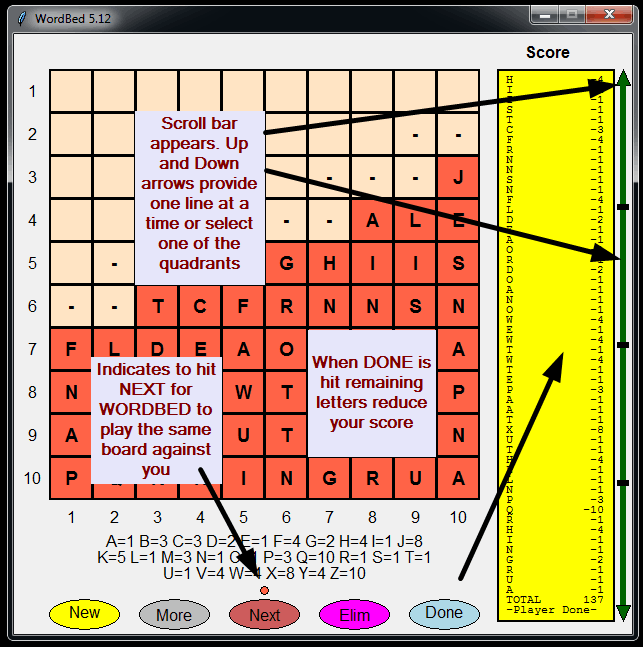 Scroll bars will appear when the score board is filled. You may use the up or down arrows to sctoll or select any of the 4 quadrants to review prior words formed and their scores along with any bonus points, and points that may have been lost when you change a letter.

A small dot will appear atop the NEXT button to indicate the game is waiting for the player to click on next to move to the next phase of the game. Before NEXT is selected, there is time to review the players scores. 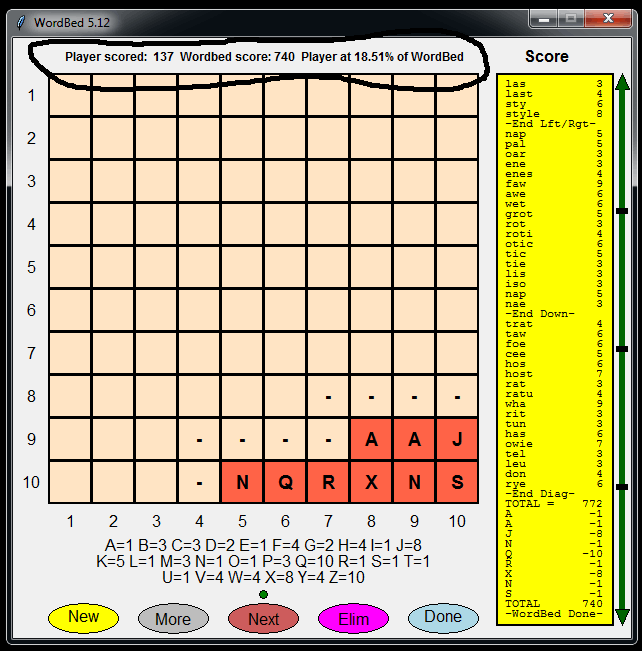 The player's score is shown at the top of the game board when they press DONE. When NEXT is selected, WORDBED will play the same game board just as the player did. You will see the words WORDBED finds and its score. It will hit ELIM itself when it sees now more words, then keeps playing when the board is compressed down. When there are no more words to find, it is done and your score is compared to the WORDBED score. Unlike the player, WORDED never changes letters. WORDBED has a very extensive dictionary of words, but you have the advantage of being able to change letters. 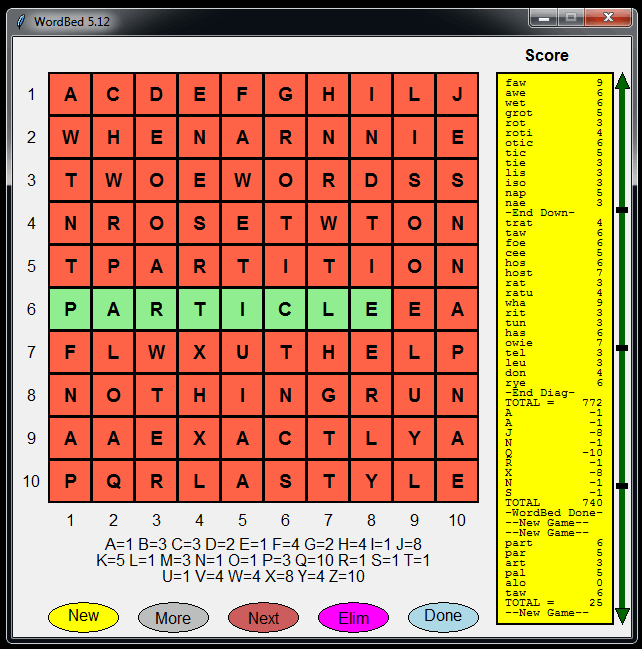 Letters turn green as they are being selected.

Click on the last letter twice or press ENTER to complete the word found. 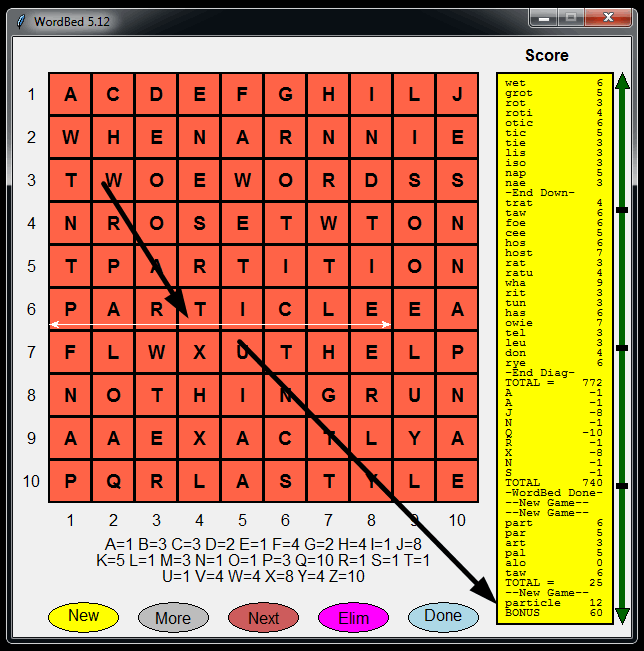 The valid word shown by the arrows, will appear on the scoreboard along wth the points scored.. 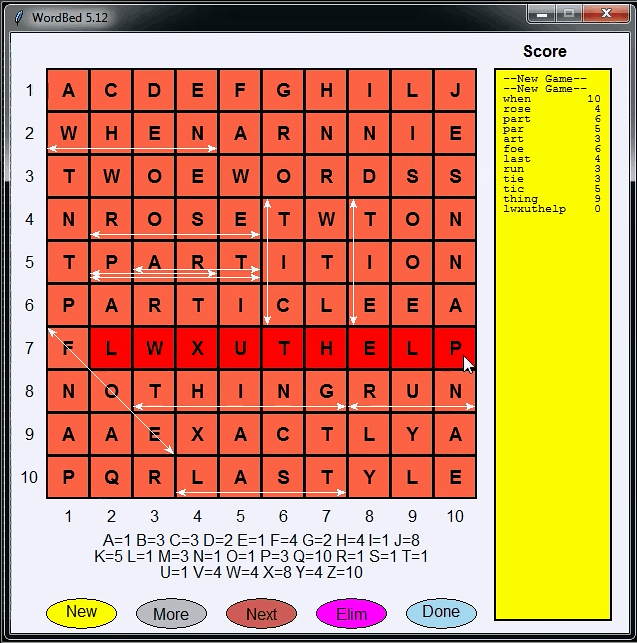 An invalid word of 3 or more letters will blink red and show as a zero point word on the scoreboard. 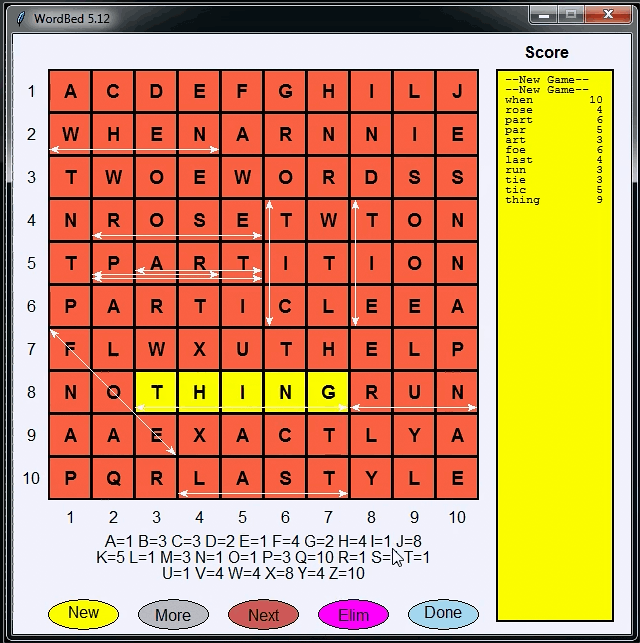 A word already found will blink in yellow. 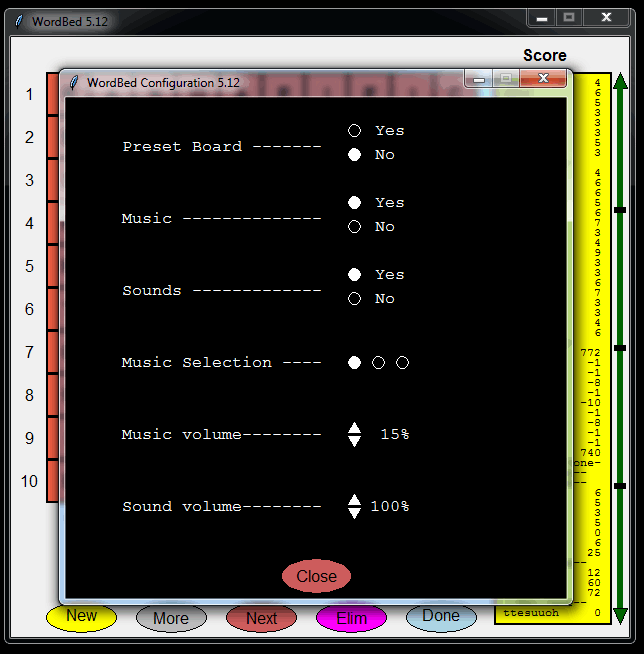 The MORE button brings up a configuration display which allows you to select a pre-installed game board to play against. Unlike the NEW button, this is the same board each time it is selected.

The rest of the configuration screen is used to turn the music or sounds on and off and to set their volumes individually. If any of these items are changed, the settings are automatically saved for use the next time you play the game.

When a letter is highlighted, it may be changed to another letter. The value of the letter being replaced is deducted from your score. So an invalid word like UOO could be changed to ZOO to score higher points.

After you have found all the words you can and have no words on the board to eliminate, pressing DONE will remove the remaining letters on the board and reduce your score by the value of each of these letters to derive your final score. This score will appear above the game board.

When you hit the DONE button, followed by the NEXT button, WordBed will play the same Board and compare your score to the WordBed score. After Wordbed is done hit NEXT again to start a new game.

After WORDBED's turn is over, If you ended up with a negative score (the points removed after hitting DONE was greater than the score of the words you found), your lost points will be awarded to Wordbed. You will be given 1 point to make up for your negative score. Your one point will be compared to WORDBED's new total score.

The NEW button can be selected to bring up an entirely new game board instead of playing the letters that appear at the start of the game.

Unlike your play, WordBed never replaces letters. When it can no longer find a word it will give up and lose the points of its remaining letters. So find as many words as you can and change the right letters to form higher value words to BEAT WordBed. Wordbed has an extensive dictionary of words but you have the advantage of changing letters.

Have fun trying to beat WordBed.